6 Must-Know about U.S. Tax for an Expat Living in Spain 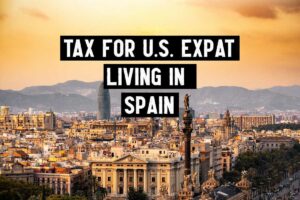 Are you moving to Spain soon? Find yourself asking, Do I Have to Pay US Taxes If I Live in Spain? We can expertly answer this query and others related to it. Here’s what you should understand about U.S. Tax as an U.S. Expat Living in Spain:

All US citizens – even those who are living in Spain – must file their US taxes annually. They will also need to submit the list of all their foreign assets or a Foreign Bank Account Report (FBAR).

However, you could make some relaxations work in your favor and avoid Double Taxation. Those include:

*This amount is specifically for 2019.

Tax Due Date in Spain

Both the Spanish and US tax years follow the calendar and begin on January 1. You won’t get any extensions, so you should file your tax returns with the Agencia Tributaria between April 6 and June 30 in the year that comes after the tax year. However, you can pay 60% of your dues at that time and the remainder by the end of November.

As a brief US Spain Tax Treaty Explanation, consider that it is pre-decided which government your taxes will go to, based on certain conditions. We’d urge you to consult an attorney to avoid confusion and penalties!

An American expat in Spain will also become a citizen of the latter, if they:

Do Expats Pay Tax in Spain? Yes, they do. In fact, non-residents are usually taxed at 24%. Residents must pay taxes on their worldwide income at a progressive rate. Be aware that your location determines that rate! For instance, in Cataluña and Andalucía, it is as high as 49%. As a resident, you may exclude 60,100 EUR from taxation out of your worldwide income in some cases.

Taxation only applies to income from Spanish sources if you are not a tax resident.

Spain Tax Rates for Pensioners is favorable. That means the income of expats who are 60-65 years old is 76% tax free. This is only possible if your pension counts as a purchased annuity. Thus, it becomes non-taxable capital for the most part.

Other Taxes in Spain

It is 21% for consumer goods, but for items like food, medicine, and water, the rate is almost half that. You may want to check how different items are taxed since the rate may be as low as 4% for others.

Do you own an asset that is worth more than 700,000 EUR? Then you must pay the wealth tax in Spain. However, for your home, you are allowed an additional 300,000 EUR. Inheritance tax varies with the region too.

Its basis, too, lies in where you live. Your car’s region of registration will decide how much you pay.

Even though there aren’t huge differences between the Spanish tax system and that of the US, there are enough. We’d recommend making taxation less overwhelming for you as a US expat by consulting a professional. We specialize in expat taxes, which is why we are a great choice for that job. Contact us, so we may ensure you don’t miss any saving opportunities!

PrevPrevious2020 US and Worldwide Tax Due Date Tax Year for Expat
Next6 Facts about U.S. Tax for an Expat Living in FranceNext