How the IRS Taxes Cryptocurrency – Everything You Need to Know 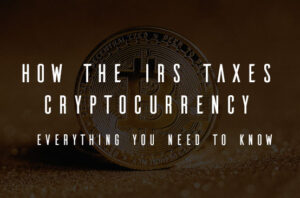 Cryptocurrency is presently one of the highly favored currencies in the market, which holds a significant market capital. While people are capable of making transactions in the Bitcoin format and purchase just about anything, from a simple handmade craft to something as expensive as a Tesla vehicle, it is still liable to taxes if you convert the currency into fiat currency (government-issued currency). As long as you’re making the transactions in the crypto format, then you won’t be liable to pay anything in taxes. But the moment you transform the currency into fiat currency and perform your transaction, you will eventually find yourself paying up capital taxes on it. According to Daniel Polotsky, CEO at CoinFlip and a Bitcoin ATM operator…

“Every time you convert Bitcoin to cash it is technically a taxable event.”

How does the IRS tax cryptocurrency?

Under the 2014 IRS ruling, cryptocurrency is treated as a capital asset, such as the investments done in purchasing stocks and bonds. It is not treated as an exchange currency such as the dollars or euros but rather treated as an asset. As a result, people have to face more complicated taxation protocols, for instance, the ones they have to follow when paying up taxes for controlled assets.

Capital assets are normally taxed when the commodity is sold at a certain profit. As a result, when you make purchases through cryptocurrency and the amount of crypto you spent has gained significant value from the time you paid for it, your spending incurs a certain amount of gains in terms of taxes.

The best way to explain this is…

Imagine you purchased $40 worth of Bitcoin and kept it in your digital wallet until it’s worth increased to $200. If you purchased a product worth $200 using that particular Bitcoin, you are liable to pay up taxes for business done with $180, which you earned through cryptocurrency profit. It doesn’t matter if you’ve spent the Bitcoin or you’ve sold it at a coin exchange. The IRS will consider it in the same way.

The IRS must have its reason why it considers Bitcoin as a capital asset while applying a tax percentage on it. According to Jeff Hoopes, an associate professor at the University of North Carolina…

Jeff Hoopes, an associate professor at the University of North Carolina

Unlike other capital assets, crypto taxes work in a completely different way. Do you know that you only owe taxes if you sell the cryptocurrency in profit? You own cryptocurrency worth $2,000, and after a period of time, its worth increases up to $4000, then you’re only going to be taxed on the capital gains you’ve earned on the cryptocurrency. If the value comes down to, let’s say, $1,500, then you won’t be liable to pay anything as taxes. The IRS will only tax you for capital gains instead of capital losses.

How Much Do I Owe in Crypto Taxes?

The amount you’re liable to pay in taxes on cryptocurrency depends on your annual income and how long you’ve held the cryptocurrency. For instance…

In What Conditions Do I Owe Tax on Cryptocurrency?

In all of the above situations, you’re liable to pay taxes on your cryptocurrency whether you appreciate it or not. While taxpayers who think they can evade this should be well-informed, the IRS is working on this. There are constant evolving regulations and requirements for reporting and paying taxes on crypto, so remember to speak to a qualified cryptocurrency accountant before making any strategic decisions.