We know these are unprecedented times for all of us
We stand with you and here to help! 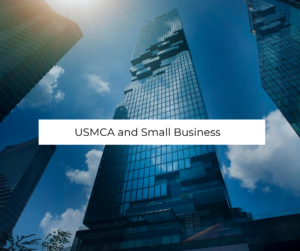 Almost a month ago, the Senate put forward the USMCA or the United States, Mexico, and Canada Agreement. Several days later, the President signed off on it, replacing the North America Free Trade Agreement. Since the latter was in effect
ever since 1994, many SMB owners want to know what changed between USMCAvs. NAFTA. First of all, the USMCA is the only trade agreement that mentions SMEs specifically. But that isn’t all. You’ll find the following changes interesting:

The USMCA Agreement provides not only useful information for SMEs in the
relevant regions. It also mentions tools that will allow the sharing of that information and the benefits that are now available. For instance, a committee
that will discuss SME issues is now in place. It comprises of government officials
from the partner countries.
There’s also a framework that encourages the ongoing SME Dialogue. As a
business owner, you can take part in it, and ensure that the benefits only grow.

In the chapter on Customs and Trade Facilitation in the USMCA Trade Agreement,
you will see some of the benefits we mentioned above. For instance, the informal
level of shipment, i.e., $2,500, reduces the paperwork needed for express
shipments within it.

Then there’s the elevation of Canada’s de minimis level for express shipments.
According to the agreement, shipments from C$40-150 are exempt from taxes
and duties – previously, it was C$20. If you’re calculating in USD, one Canadian
dollar was equal to $1.32 in 2019.
Besides that, Mexico’s de minimis level that is exempt from duties and taxes is
now from US$50 to US$117 for express shipments.

You’ll also discover advantages to SMEs in the Digital Trade chapter, such as:

The USMCA Overview will show you that, like NAFTA, it maintains the tariff rate
on certain food and agricultural products at zero. Additionally, Canada will lower current tariffs on poultry and dairy too.

Look for specific support for the SMEs in the eponymous chapter of the
agreement, including:

The USMCA Support also makes it unnecessary for small businesses providing
services across the border to open a foreign office. Aside from eliminating the
local presence rule, the chapter on Cross-Border Trade in Services urges that
parties check the effect their regulatory actions have on SME service suppliers.

The same is true for the government’s practices that increase transparency and
accountability. Due to this step, SMEs will not cave under a disproportionate
burden since it will be divided evenly between all parties. It will also lead to less
unnecessary, duplicative, or divergent procedures.
While the date when these provisions go into effect is still unannounced, they will
promote US GDP and job growth when they do. For more USMCA Facts and its
effects on the US economy, stay in touch!

PreviousIRS Can Find You If Your Taxes Are Delinquent
NextPreparing For Economic Changes: Making Strategic Plans