What’s the Difference Between a 401(k) & a Canadian RRSP? 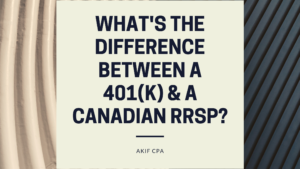 We recently moved to United States from Canada due to work and my U.S. employer is offering a 401(k) plan. I have a Canadian RRSP that I contributed to but I have no idea how 401(k) plan can help me? Can people contribute to the 401(k) plan if they already have a good amount in their Canadian RRSP plan? Also, what is the difference between 401(k) and RRSP? Can we convert RRSP to 401(k)? How does the U.S tax the Canadian RRSP? All of these queries and confusions can be taken away as you read further below.

The two 401(K) and the Canadian RRSP both provide people monetary savings for retirement. Let’s see the similarities and distinctions of both the 401(k) and the RRSP, along with the contribution limitation. So, without further ado, let’s get started.

● To invest and increase retirement account, both provide a tax deferred way. ● The annual contribution limitations are part of both the plans. ● Both provide access to various combinations of Investments for instance stocks, bonds, mutual funds, fixed deposits or GIC in Canada.

How is a 401(k) Plan different from a Canadian RRSP?

The Canadian RRSP account doesn’t penalize an account holder for early withdrawals for Canadian tax purposes. However, the situation is different in the United States, where an employee could be taxed an outrageous 10% for early withdrawal on top of regular income tax. Unused RRSP contribution limits can carry over to next year, whereas a 401(k) plan doesn’t have a flexible policy for rollover contributions. Let’s find out if traditional IRA works in a similar way at Canadian RRSP?

No, because current law, the rules and regulations do not allow any Canadian RRSP to maintain the same tax-deferred status in both countries thus you cannot convert RRSP to IRA. In general, Canadian RRSP holders have these three options which include complete RRSP withdrawal, convert RRSP to an RRIF, and leave it and let it grow.

Complete RRSP withdrawal sounds easy and can help you make your tax filing simple in many ways. Few top reasons a complete withdrawal include; RRSP account is small, your age is under 59 and half and you immediately need funds.

2. Convert RRSP to an RRIF to Begin Distributions

3. Leave It and Let it Grow

It is one of the easiest ways if you don’t need money on an urgent basis is to leave the money in the RRSP account and let it grow till the retirement age. Of course, you can longer contribute to your RRSP this also helps with less reporting in both the U.S. and Canada.

Filing a Canadian tax return for the first time from the U.S.? Learn step by step how you can file a Canadian tax return form T1. Canadian Retirement Plans tax in the U.S. can be extraordinarily complex and understanding how U.S tax Canadian RRSP is important. Per IRS, accrual of income in Canadian retirement plans like RRSP is taxable in the U.S. but due to U.S Canada tax treaty and IRS relief, income can be deferred. There is 25% tax withholding on RRSP distributions that will be imposed by Canada.  However, an RRSP withdrawal counts towards U.S. income as well. Therefore, a large RRSP withdrawal may push you into an even higher U.S. tax bracket. Reporting of RRSP Distribution on U.S. 1040 Income Tax Return adds another wrinkle to the problem which should be understood deeply before filing a 1040 tax return. In 401(k), contributions are tax-deductible, and even capital gains are tax-deferred, so this structure provides you with the same benefits. At the same time, the withdrawals or any distribution are taxed.

How Can I Save Taxes on the Sale of Small Business?
Profit Interest in Limited Liability Company and what is profit interest?
Selling Rental Property in Canada: A Tax Guide for Non-Residents
PrevPreviousShould a Doctor or Dentist Hire an Accountant to do Bookkeeping for the Medical Practice?
NextTelehealth, Medical Professionals and Accounting: What You Need to KnowNext