Learn How to File Canadian Income Tax Return in the U.S. 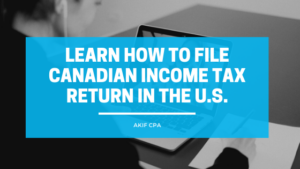 Determining If You’re a Resident or Non-Resident

Before filing a Canadian tax return form T1 with CRA in the year of the move, you must determine where you are a tax resident of Canada or not. You may still have to pay federal and provincial income tax to Canada even if you are living, working or traveling to the U.S. or other countries. As long as you’re still considered a resident of Canada, you will be taxed on your worldwide income each year. That means all United States source income would be subject to Canadian Income tax. Your tax residency status determines the tax rules that apply to you while you are outside of Canada.

The factors mentioned above will determine whether you will be considered a factual resident, deemed resident, a non-resident, or a deemed non-resident of Canada for income tax purposes. A single primary tie can make you a factual tax resident of Canada. Primary ties to Canada can include but are not limited to 1. Canadian tax residency of a spouse or common-law partner 2. Personal home in Canada which can be rented 3. Dependents living in Canada

On the other hand, multiple secondary ties might be required to determine tax residency status. Secondary include, but are not limited to:

If you don’t meet any conditions for the deemed or factual resident, then there is a good probability that you will be considered a non-resident of Canada for tax purposes.

A tax non-resident of Canada is subject to different tax rules, and are only taxed on certain types of Canadian income. An individual becomes a non-resident when they break most or all of their primary and secondary ties to Canada. Upon determination as a non-resident of Canada for tax purposes, you are automatically considered to have sold certain types of property or assets at their fair market value, and then immediately re-acquired them for the same amount. Yes — even when you never actually sold or bought anything. This is called a deemed disposition. What does it mean for you? And you can get details here. In a nutshell, you may have to report a capital gain or loss on your tax return depending on the fair market value of the asset or property on the date of departure and pay applicable tax to CRA. We have a great blog that goes into detail about the ins and outs of the Canadian departure tax.

The details include assets that are exempted from departure tax, assets they are eligible for departure, filing obligations, forms required to file departure tax, and special tax consideration when moving to the U.S. to avoid double taxation.

Further disadvantageous of becoming a non-resident for tax purposes is that you can longer contribute to TFSA and RRSP. GST/HST credit and Child Benefits must stop by notifying the CRA. Inform all your financial institutions which can include bank, advisors, and pension accounts of your change in tax residency.

Undecided about your Canadian Tax Residency

The Canada Revenue Agency (CRA) can help you through filing form NR73 and Form NR74.

A word of caution, sometimes CRA can further investigate to determine your tax residency status, after all, CRA is in the business of collecting tax and not the other way around. Instead of filing form NR73, consider filing a departure tax return and declaring your emigrating date.

T1135 – Information tax return to report by a tax resident of Canadian which includes individuals, corporations, trusts, and partnerships to report interest in a controlled or non-controlled foreign affiliate.

T1142 – To report both the capital and income portion of the distribution from the U.S. Estate or Trust.

T1161 and T1243 – This is to report deemed disposition (part of the departure tax return) of assets when a Canadian tax resident becomes a non-resident for tax purposes. Please note that assets owned in Canada and worldwide are reportable with certain exceptions as mentioned earlier in the blog.

T1244 – This form is used to make an election to defer tax on the deemed disposition of the assets reported on form T1243.

T2203 – For taxpayers that provide professional services or do business in another province or country this form is required to properly calculate where this income will be taxed.

T2209 – To report and claim foreign tax credits for the taxes paid to the U.S. or any other foreign country to avoid double taxation. This form is useful when you are living in the U.S. but are still considered a Canadian tax resident which means all of your U.S. source income is also taxable in Canada. In order to claim foreign credit in Canada, you must first file U.S. income tax to report and pay applicable taxes. This is very similar to US IRS form 1116.

April 30 – Individuals must file and pay tax to CRA without accruing interest, fees, and penalties. See below for individuals who are self-employed.

Penalties for filing late are 5 percent of the total balance owed at the time of filing plus 1 percent for each month the tax return is late. The interest is calculated on the total amount due including penalties.

For social security taxes, the US and Canada totalization agreement is a great tool to avoid double taxation on the same earnings. If you pay into US social security, then you do not pay into Canadian social security. Further, self-employment taxes are only payable in the country where the individual is considered a resident.

The US Canada tax treaty is another great way to help eliminate double taxation between both the US and Canada. The US Canada tax treaty covers a wide range of topics, which include preferred withholding tax rates for Canadians, reporting of income, mutual recognition of retirement, and pension accounts which include RRSP, RRIF (more on Canadian retirement accounts below), and much more.

The tax treaty between the U.S. and Canada prevents double taxation for income earned by Canadians through a foreign tax credit. This is especially helpful for Canadians working in the U.S. or abroad which allows the taxpayer to claim foreign tax credits for income tax paid to another country on the Canadian tax return. The treaty also helps Canadians prevent certain tax withholdings from their income through a form that maintains that the U.S. earned income will be declared on a Canadian tax return.

U.S. Tax for Canadian retirement plans can be extraordinarily complex. One of the main complications arises from cross-jurisdictional issues, such as the Canada-U.S. Tax Treaty. Therefore, understanding how the taxes on withdrawals on pensions and Registered Investment Plans like the RRSP, RRIF, TFSA, or certain pensions in both countries will be helpful. This article explains U.S. tax treatment of the RRSP, RRIF, and TFSA in detail for Canadians living in the U.S.

Per IRS, income from Canadian pension plans like CPP and OAS is considered taxable income equivalent to US social security benefits for tax purposes. The income is reported on your 1040 and is taxed at the 85% inclusion rate. Moreover, because of provisions in the USA-Canada tax treaty, your CPP and OAS income is not taxable in Canada and is totally free from CRA non-resident withholding. Learn more about how the IRS treats payment from CPP and OAS in the detail by going to the blog here.

Calculation of Capital Gains for Canada and the U.S.

Need help with filing a Canadian tax return or want to learn more about the topic. We at Akif CPA are here to help. Do you have unique issues or concerns not discussed in this blog? Then please contact us by email or phone. We are here to help.

PrevPreviousIs a Traditional IRA Equivalent to A Canadian RRSP?
NextShould a Doctor or Dentist Hire an Accountant to do Bookkeeping for the Medical Practice?Next