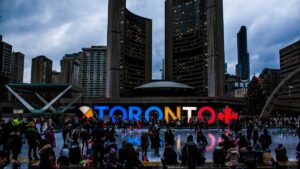 American working in Canada face a new set of tax obligations and entitlements. Before you begin working abroad, consider how the tax consequences will affect your finances and liability. Below you’ll find the top 5 tax tips for Americans working in Canada.

First, you’ll need to know if you’re a resident or non-resident working in Canada. If you still plan to live in the United States or don’t have significant residential connections in Canada, such as a spouse, home, or dependents, you’re probably a non-resident. Alternatively, if you lived outside of Canada throughout the year or stayed in the country for less than 183 days, you’re also considered a non-resident.

You may be considered a resident if you plan to settle down in Canada for more than two years, apply for Permanent Residency, or stay past the expiration date of your work and travel visa.

Tip 2: Obtain a Certificate of Coverage

Are you working in both Canada and the U.S.? If so, you could end up paying social security taxes in both countries. Canadian workers have to contribute 4.95% of their gross pay to the Canada Pension Plan (CPP) and 1.63% for the Employment Insurance Plan (EI). If you’re also working in the U.S. and already paying social security taxes, you probably don’t want to pay them twice.

You can avoid double taxation by obtaining a Certificate of Coverage from the Canada Revenue Agency and presenting it to your U.S. employer. Your employer can then provide this certificate to the Canadian authorities if requested. The certificate makes you exempt from paying Canadian social security taxes, but only if you’re working in Canada for five years or less.

If you earn at least 90% of your income in Canada, you’re could eligible for tax credits. Tax credits are an amount of money you can deduct from your owed taxes. In contrast to deductions and exemptions, which decrease your taxable income, tax credits reduce the actual amount of tax you owe.

Under certain circumstances, you may qualify for personal tax credits or a tax-free earnings allowance of up to $11,635.  If you’re not exactly sure how much of your income you will earn in Canada, it’s better to aim on the safe side and not claim credits. If you end up overpaying, you can always get a refund when you file your next tax return. On the other hand, if you incorrectly claim tax credits, you may end up owing money to Canadian authorities.

Typically, you can get an exclusion if you plan to work in Canada for at least one full year. A partial-year exclusion may be possible if you plan to return to the U.S. mid-year. The Interactive Tax Assistant from the IRS website can help you determine if you’re eligible for a Foreign Earned Income Exclusion.

Don’t forget that as a U.S. citizen, you’re still required to file a U.S. tax return, even if you’re living and working abroad. You’ll need to submit an annual Form 1040 by June 17th to report your worldwide income. In the U.S., your worldwide income consists of both your domestic and foreign earned income.

Usually, you won’t have to pay excess taxes since there are many systems in place to prevent double taxation. The U.S. Canada Tax Treaty of 1980 enables Canadian and American governments to share tax revenue data to more accurately determine which income is taxable and which is exempt.

Read more on how you can prevent double tax and tax in Canada.

As an American working in Canada, you’ll need to file both a U.S. and Canadian tax return, even if you’re exempt. However, several provisions can help limit your tax liability. We advise completing your tax returns as early as possible to avoid the deadline rush. Remember that Canadian taxes are due April 30th and extensions are available for non-residents until June 30th.

Please contact us by email or phone if you have issues or concerns not discussed in the blog. We are here to help.